BASTILLE we love you

So last night it was the long awaited Bastille gig at Stylus in Leed Uni, slightly weird to be back in the union since I haven't been since the day I dropped out, but it brought back a lot of happy memories!

Anyway, Bastille! We have been so excited about this gig since we heard they were touring. And if it wasn't for good old twitter we wouldn't have gone at all since Ticketmaster did have Leeds tickets for sale. Luckily I moaned to Bastille on twitter and they kindly informed me they were in fact playing here. Great!

As expected they were AMAZING! Such a bargain too, never will we get to see Bastille for £10 again, and in such an intimate venue! Anyone who's lucky enough to get to see them you'll love it! They also came into the crowd (not near us, sob) all in all they were just epic. Dan (the lead singer) also went to Leeds uni, who knew! So he was loving it!

I'm also a big fan of MS MR who supported, they remind me of Florence and The Machine but with blue hair and american accents! Anyway they're defiantly worth a listen! 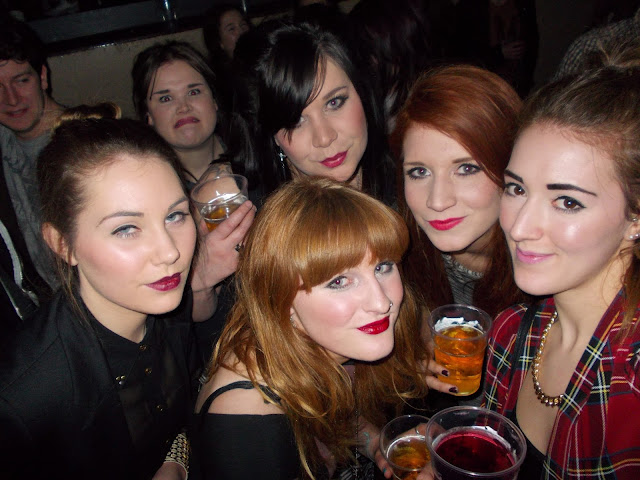 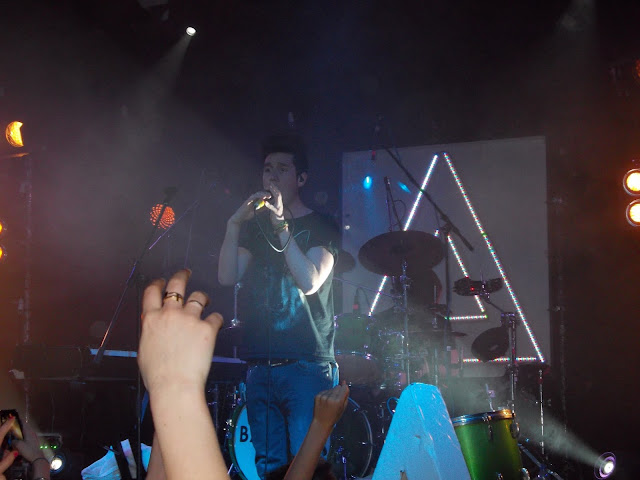 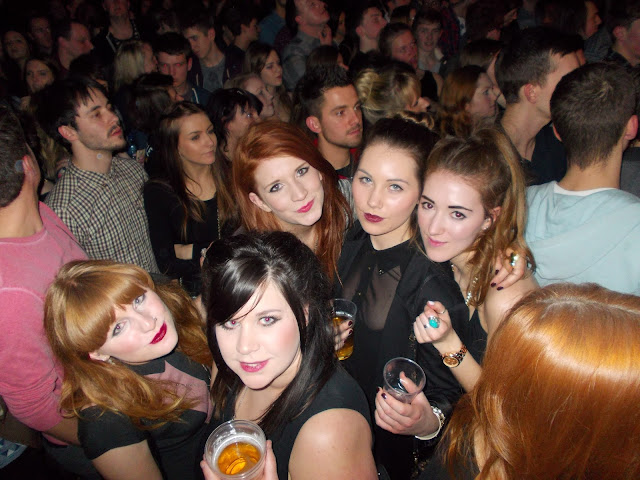 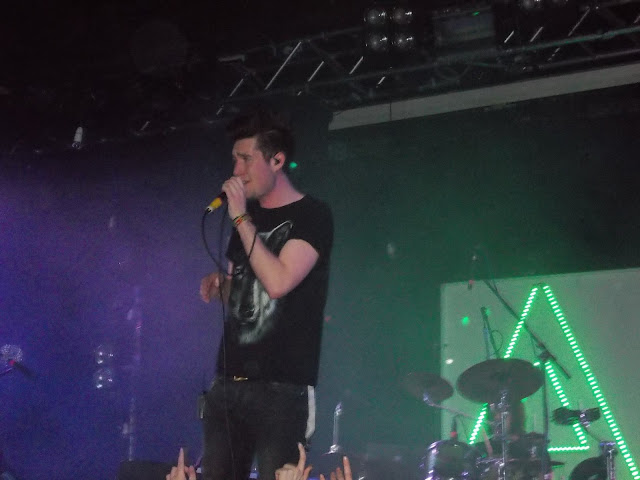 Bit of a change to outfit posts but I had to share my excitement, and congrats to Bastille on number 1 album and number 3 with Pompeii!

Lauren :) X
Here's a little peek at how good they were....and how mental the crowd was, and me, filming.
Posted by Lauren Jeanne at 4:11 pm No comments: 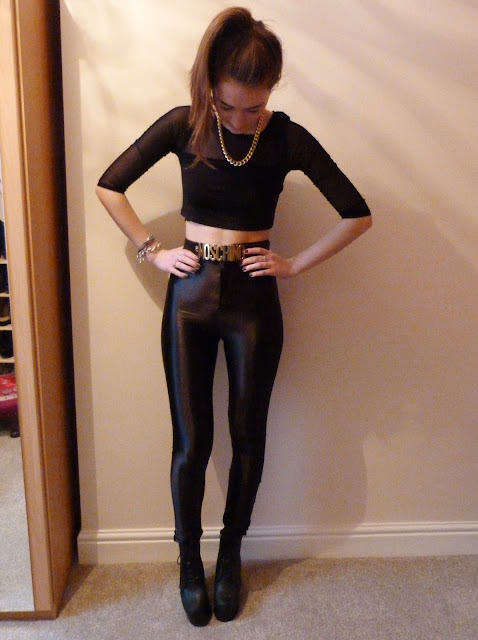 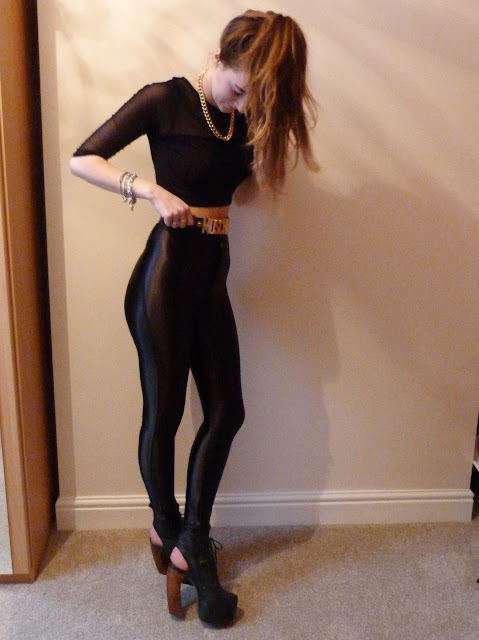 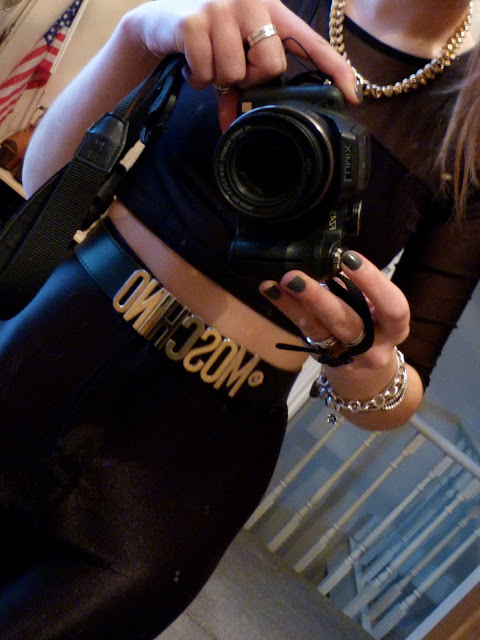 So I've had these new disco pants since Christmas and I've only just had chance to wear them! I refused to pay another £70 for American Apparel disco pants so I opted for (or rather asked Santa for) the Missguided ones. And I can say I'm pretty impressed. Obviously you pay £70 for quality but for £25 these super shiny black ones are perfect. They're slightly more high waisted too which is nice. The only thing I would say it maybe get a larger size and the legs are quite tight! Anyway, safe to say I'll be getting my wear out of these bad boys.

Things we lost in the fire 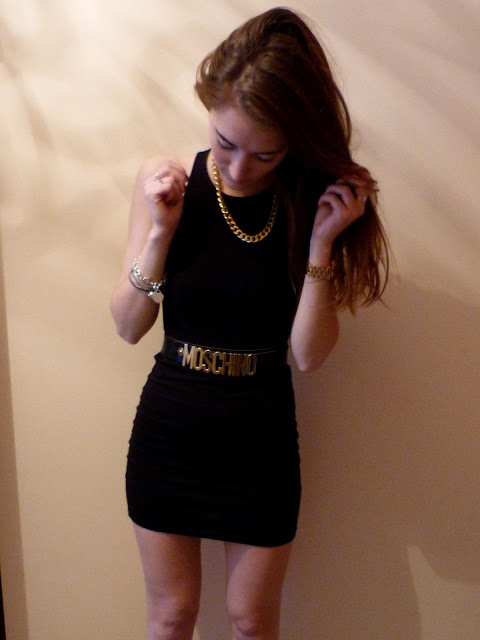 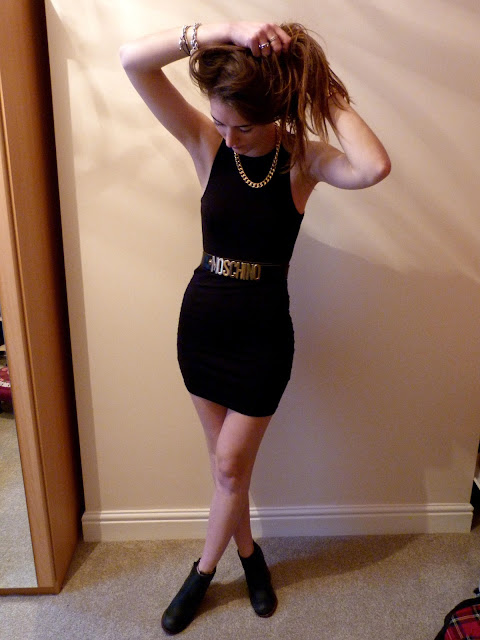 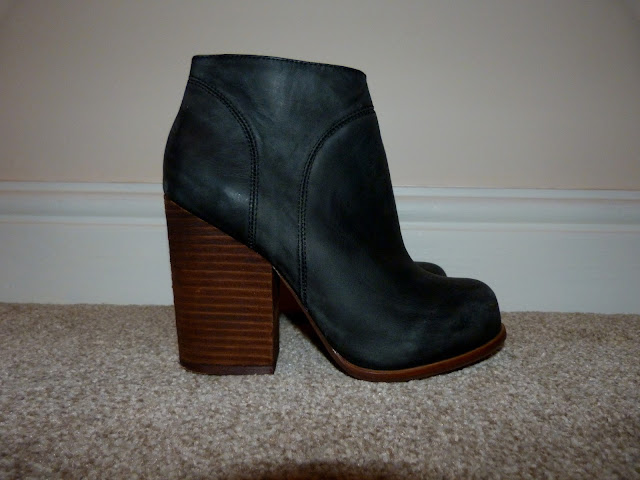 Now we're finally getting some light during the day I can actually take some photos! The weather has been so awful, I hate Jan and Feb, dark and dull and no clothing to buy. Mainly because I have no money but also I'm more than ready to buy summer clothes now! I have, however, booked a holiday this summer so I can start getting excited!

Anyway, the outfit. I wore this to my friends leaving do at work...

My boots were a bargain!! Jeffrey Campbells in TK Maxx, who'd have thought? And for £29.99 I couldn't resist (although my bank account nearly did 4 days before payday). They're super comfy too.

PMy belt was also a huge bargain, I have 'Moschino belt' as a saved listing on my iPhone so I get notified when a new one is added, this majorly paid off. This baby cost me £5.99 + postage so I was more than chuffed. Obvs it's not authentic but I can't quite afford £100 at the mo!

I bought my necklace around xmas time, I had been looking for a simple gold chain forever but all the ones I found where hollow or just crap and light but this one in republic was perfect! And at £9 compared to about £20 in Topshop I was impressed!

P.S. Quite a few of my posts/outfits are named after songs so I will start putting the artist too. This one is Things we lost in the fire - Bastille (I've got ticket to see them in March - so excited).

Posted by Lauren Jeanne at 4:01 pm No comments:

So I finally organised my shoes! They have been upgraded from plastic boxes in my wardrobe to an actual shoe rack! (Well they're divided between 3 racks and now only one box - I have too many shoes.) The only problem with the shoe rack is the gaps aren't quite big enough for my shoe boots or really high heels - which make up the majority of my shoes. Luckily I have a few more shoe racks to use!
I sorted out my necklaces too, it's so much easier than running around my house looking for the last place I left a necklace. My spare room has now become my dressing/storage room (and gym since there's a weight bench in the middle too!) 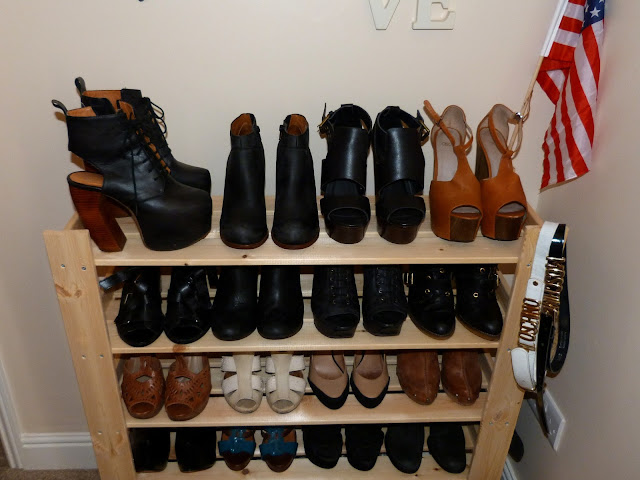 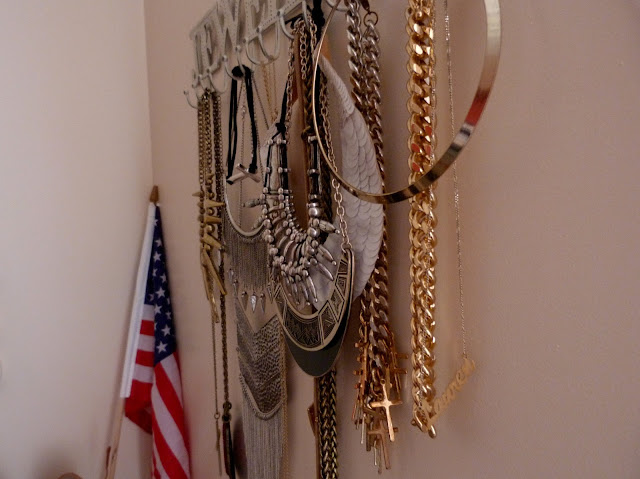 Now getting dress is easier in a morning and it finally starting to get light during my hours at home I might be able to start blogging again!

Lauren :)
Posted by Lauren Jeanne at 6:22 pm No comments: 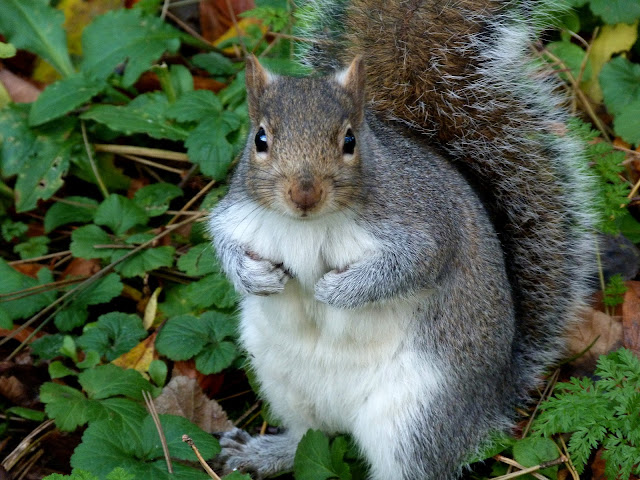 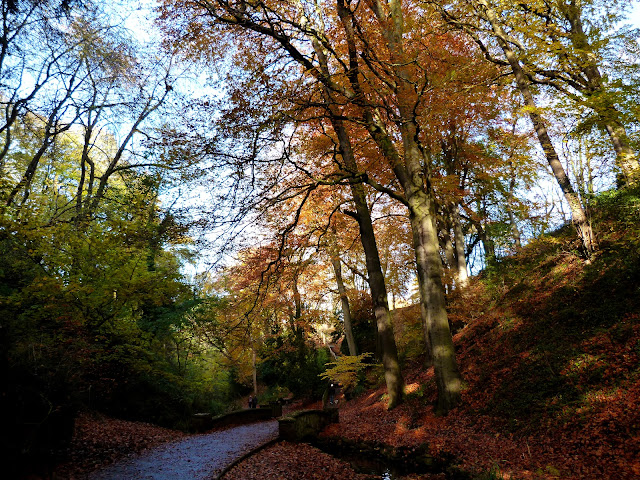 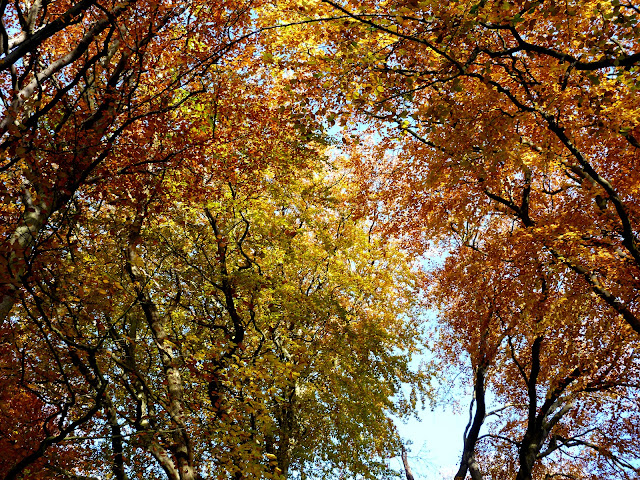 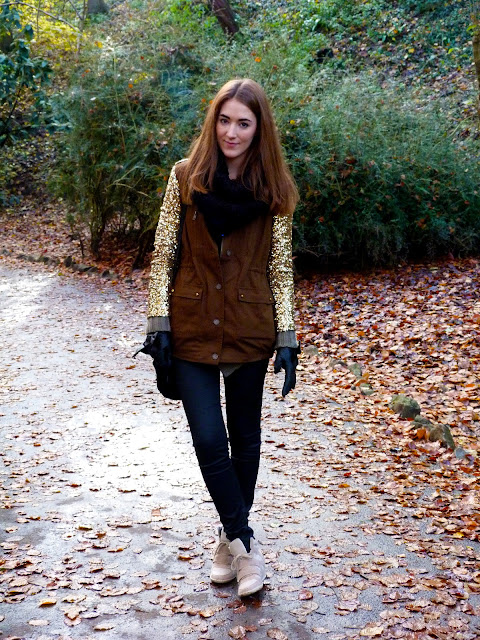 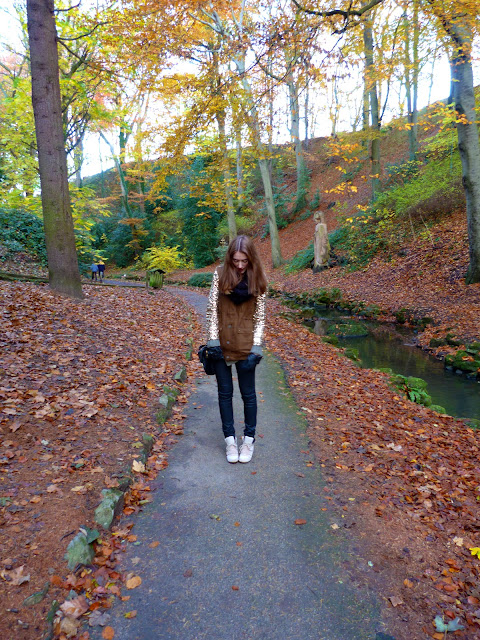 Today I went pine cone hunting in our local park so I can make some Christmas decorations! Safe to say wearing cream suede wedge trainers was not a good idea, oh well! We also got followed by two squirrels, they must have though we had food for them, needless to say I ran away. I think anyone would if you'd had one run up your leg before. They're so tame they just come right up to you!
Anyway....my clothing
I got my sequin jacket from Missguided on Saturday morning, been waiting to buy this bad boy for weeks since the lovely Millie Macintosh was wearing it!! I LOOOVEEE it, a little girl even told her mum I was sparkly! Get in. They've still got some in stock - http://www.missguided.co.uk/seqtea-dark-khaki-sequin-sleeve-jacket

My jeans are H&M wax coated ones, a winter staple. Wedge trainers are Matalan and scarf is Primark.
All you need in winter is a good pair of jeans and a nice coat...underneath I have the oldest (but warmest) cardi with random buttons missing...who'd know though!?

Just got to wait for pine cones to dry now so I can get creative!! 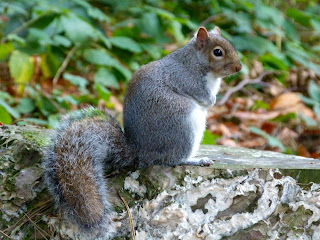 Lauren Jeanne
I'm an ex-fashion student and university drop out living in a small seaside town, with no idea what I want to do with my life I've decided to start a blog to occupy my time! P.S. My blog title is song lyrics.